Irene Castruita believes that through community organizing, art, danza and music “another world is possible – a world where many worlds fit.” With her lyrics, whether it be in Son Sin Fronteras, a San Diego based group fusing traditional son jarocho music from Veracruz with modern styles, or in spoken word, she hopes to influence others to love, heal and go beyond borders with creative expression. She is also a member of Los Able Minded Poets, a spoken soul, funk, hip-hop band who in 2004 won the San Diego Music Awards for “best hip-hop album.” Currently, she is also teaching poetry workshops in Juvenile Hall, she believes that writing is transformational and a positive outlet for youth. She has also worked with different organizations such as M.E.Ch.A. Central de San Diego, Colectivo Zapatista de San Diego, Proyecto de Solidaridad Calpulli, Circulo de Mujeres de Color, the Red Calaca Arts Collective and Xispa con Tita, a progressive cross-border radio program which focuses on bridging art, music and culture in the San Diego-Tijuana region.

Isaias Crow specializes in public art on a wide range of scales, whether it's an experimental community mural, painting on utility enclosures, or directing a team of people to produce a multifaceted mural within diverse housing complexes. Crow's portfolio contains projects that required close collaboration with architects and designers in order to integrate his art. This is obtained by merging his knowledge in construction of homes and his academic education in media arts and animation, it creates a seamless understanding of what collaborators are requiring of him.

In 2008 he was selected and recognized as a "Mover and Shaker" of San Diego, an exhibit that provided awareness about the current people who are creating a difference in the San Diego visual arts community. Additionally, he is in constant participation with the Centro Cultural de la Raza, assisting in organizing, strategizing and conceptualizing for upcoming events and art exhibits. Currently, Crow amongst a group of associates and friends have been introducing experimental workshops at different venues and schools. This and his belief of intertwining and collaboration with other individuals is something that he believes is much needed in our society to generate solidarity in turn creating a difference. 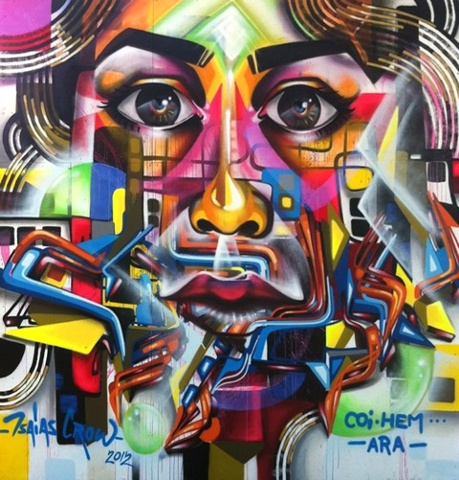