Mike Calway-Fagen produces work that is unabashedly harsh and tender. Unbowed by the plenitude or the injustice of existence, he brings forth both, asking us to see it all with clear eyes, soft hearts, and without fear. Hailing from Nashville, Tennessee, Mr. Calway-Fagen received his BFA from the University of Tennessee in Knoxville, an MFA from the University of California in San Diego, and attended the Skowhegan School of Painting and Sculpture. Mike is represented by Gazelli Art in London.

Keenan Hartsten: I was raised in a small town in Oregon nestled between the mountains and the high desert. Growing up without cable television, my youth was spent building elaborate forts, giving birth to baby goats on our family's small ranch, knitting by the fire with my mom, and seeing and feeling life through a holistic, hands-on approach. A deep connection to the land, its natural rhythms, and its inhabitants imbued in me a sense of wonderment in the aliveness of the world. I moved to San Diego in 2005 and went on to receive a B.A in Visual Arts from the University of California, San Diego in 2010. Since then, I have been engaged in developing an art practice that combines my love of seeing, feeling, building, and all things natural, to create installations, interventions, and spaces where people have the opportunity to feel alive and inspired.

Justin Hudnall graduated from New York University's Tisch School of the Arts by way of the Department of Dramatic Writing. He briefly absconded from the arts to serve with the United Nations Children's Fund (UNICEF) in New York and Southern Sudan. He currently acts as Executive Director of So Say We All, a San Diego based non-profit arts collective. He a San Diego Foundation Creative Catalyst Fellow and recipient of their Rising Arts Leader Award, as well as a former resident of Vermont Studio Center. His work has been featured by The Quotable, Citybeat, Voice of San Diego, Pinchback Press, Naughty American, The Huffington Post, Vermin on the Mount, and Heinemann Press.

Ben Strauss-Malcolm is the gallery director at Quint Contemporary Art (QCA). QCA was founded in 1981 and exhibits contemporary painting, sculpture, installations, drawings, prints and multimedia works by emerging and established artists. Before QCA, Ben worked at The Museum of Contemporary Art San Diego.

From October 13-26, Sound Revival, the contianer created by this group of artists will be on view at the San Diego Public Market each Sunday and Wednesday from 9a-2p. The market is located at 1735 National Avenue, San Diego, CA. For more information about its exact location inside the market, please contact 619-233-3901. 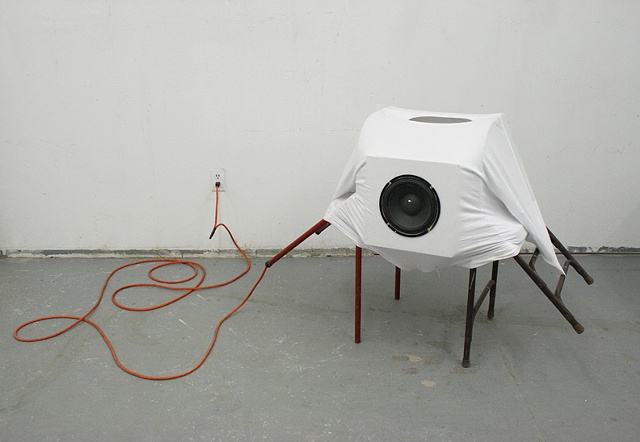 Curated by Ben Strauss-Malcom
< previous next >